The growing grocery integrated the first self service departments, preceding the supermarkets which had opened in the meantime on the other side of the Atlantic. “We must not forget that at the time, a lot of products like noodles, Rice, Coffee or eggs were sold loosely, without packaging,” commented Nicolas Hansen. 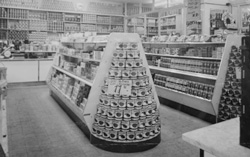 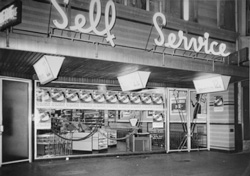 In 1959 a second outlet opened, but commercial law didn’t allow to open subsidiaries under the same name alima. In a competition to find a name for the new shop, “A-Z” came up and the first true self-service shop opened 15, avenue de la gare.

Ten years later in 1969, the original alima moved to the adjacent “Centre Bourse” which had just opened, where it still is located today. In 1974 the outlet doubled its surface to 800sqm.

In 1980 a new subsidiary opened avenue du Dix Septembre in Belair. The law on subsidiaries having changed in the meantime, this new 750sqm outlet could be named alima-belair.

Shortly afterwards, the A-Z store moved to nearby rue Bourbon and established in the former “Imprimerie Saint-Paul” which had moved to Gasperich, and was renamed alima-gare.

In 2006 alima-bourse grew once more, adding some 500sqm of non-food items like perfumes and decoration articles, in the basement.

2009 alima-am Park opened. The shop is located at the ground floor of the “centre intégré pour personnes âgées St. Elizabeth am Park”, avenue Emile Reuter (formerly Clinique St. Elizabeth). Despite its restricted surface, the shop offers more than 1.500 items, suiting particularly the needs of the centre’s residents, but also those of companies established in the neighbourhood, like “Bourse de Luxembourg”, the Luxembourg Stock Exchange which moved there in 2014. 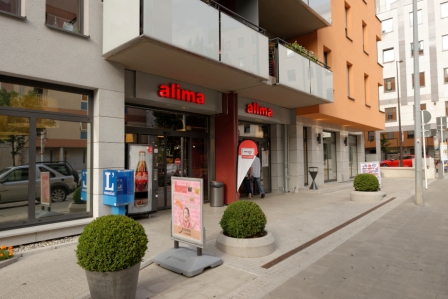